Create an Account - Increase your productivity, customize your experience, and engage in information you care about.

The Florida Legislature, through the Energy, Climate Change and Economic Security Act of 2008, established a statewide weight-based recycling goal of 75% by 2020. The Act instituted the 75% recycling goal, directed the Florida Department of Environmental Protection (FDEP) to establish a reporting protocol, and directed counties to report annually. The Legislature also established interim recycling goals: 40% by 2012; 50% by 2014; 60% by 2016; and 70% by 2018. These recycling percentages are tallied by comparing the total tons of materials collected to the total tons of materials recycled. For those counties that implement waste-to-energy measures, the recycling rate is adjusted to include recycling credits given for that energy creation, with additional credits assigned for counties with traditional (unadjusted) recycling rates that reach 50%. A list of adjusted recycling rates by county for 2020 can be found on the FDEP Total Recycling Credits page.

The following chart shows the recycling trend for the Solid Waste Authority of Palm Beach County in its efforts to meet the statewide recycling goals established by the 2008 Act. 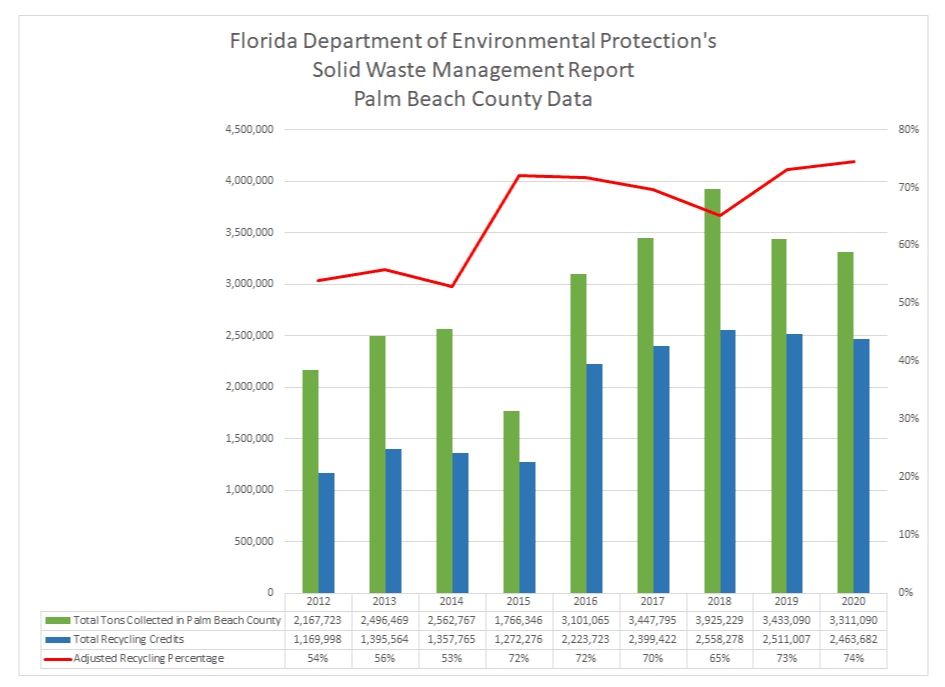 These reports detail the amount of recyclables sold on the market each month and the revenues received from their sale.  The current fiscal year report is updated around the 15th of the month to include reporting for the previous month.